We are so lucky: We have two appearances from Kate Middleton and Meghan Markle at essentially the same time this morning. And the similarities don't stop there—they're also both wearing pretty black and blue outfits. Royal group chat, is this your doing??

The Duke and Duchess of Cambridge (Kate was a last-minute arrival) "attended the launch of the National Emergencies Trust, an independent charity which will provide an emergency response to disasters in the UK," according to Kensington Palace. Sources are thinking that Kate's wearing bespoke Emilia Wickstead, which bears a striking resemblance to their Danni dress except in blue, Gianvito Rossi heels, and an Aspinal clutch. She's apparently wearing sapphire earrings that originally belonged to Princess Diana, which match her ring (and entire outfit, TBH) perfectly.

The Duke and Duchess of Sussex, on the other hand, (without Camilla because she has been sick), were visiting the Field of Remembrance at Westminster Abbey and laid poppy crosses. Meghan may have been wearing this Philip Treacy hat (that's a brand Kate uses often, so maybe they talked about where to get a good formal hat??). TBD on an ID for the rest of the outfit, including her cozy dark blue jacket, leather gloves, black dress, but the knee-high leather boots are Tamara Mellon x FRAME collaboration.

I look forward (not really) to royal conspiracy theorists saying that this must mean that the two are secretly fighting through the power of dueling black and blue outfits that must secretly symbolizes the punches they could throw at each other. Can't they be gorgeous and also totally be fine with each other? Maybe they both love black and blue and wanted to twin!

And here are full-length looks at each outfit: 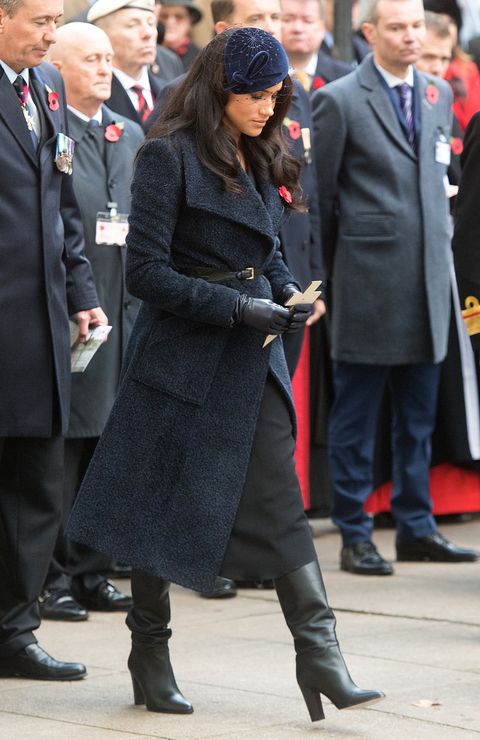 Ugh, gorgeous, both of them.