In celebration of Disney on Broadway’s 25th anniversary (beginning with "Beauty and the Beast" in 1994!), the powerhouse partnered with the Fashion Institute of Technology and challenged students to modernize the classic looks of its most beloved female characters. The design students took the inspiration and the Disney magic with them, too.

Ten student finalists were chosen from nearly 100 submissions to have their ensembles exhibited at FIT’s Art & Design Gallery in the Pomerantz Art and Design Center — and meet their corresponding Broadway counterpart.

"Elsa seems to be really soft on the inside but harsh on the outside, and that's something I really connect to. I feel like my personality corresponds to her a lot," says Moogi. "The structural parts of my design show her structured personality and how she's holding it all together and trying to conceal her powers, while the free-flowing trails show her love for her family."

To modernize the costume while remaining true to the character, Moogi utilized the color of Elsa's iconic blue gown to create a pant-and-corset ensemble as well as a gown. "I wanted to make one gown to capture the glamorous queen that she is, but the pant seemed more practical, more contemporary – something she would wear in today's world," says Moogi. The high slit on the gown makes the luxe garment equally as pragmatic as the pantsuit, which is perfect for Elsa's casual hobbies of climbing icy mountains and building enchanting castles. Moogi also hand-applied rhinestones onto both garments to represent Elsa's iciness. 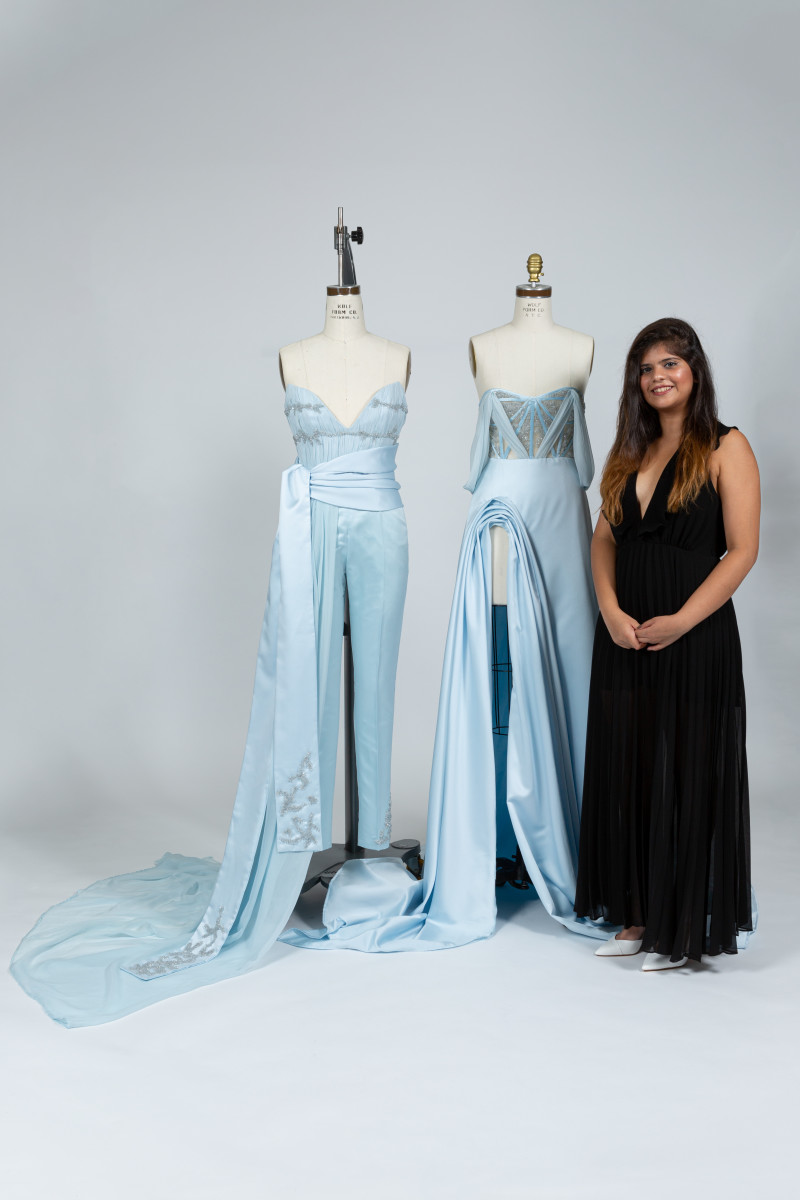 Ashna Moogi, a fashion design student at the Fashion Institute of Technology, with her winning garments designed for Elsa from 'Frozen.' Photo: Courtesy of FIT

Georgianna Wells, a fourth-year fashion design student with a specialization in sportswear, designed looks for the character Katherine from Disney's Broadway musical "Newsies." It takes place at the turn of the 20th century, which inspired Wells' decision to design suits. "The biggest change in womenswear in the past century has been moving from long skirts to pants. That's the biggest sign of equality in gender. I wanted to do a pant, but I wanted to keep that skirt volume, so I have this accentuated waist and the strong shoulders like the costumes do," says Wells. "[Katherine] wears a lot of these skirts, which Kara, the actress that played her, told me were so heavy because she had to dance." Prior to this competition, Wells had been friends with the actress who originated the role on Broadway, Kara Lindsay, which led to her choice to redesign this particular character.

"There was no Katherine character in the ["Newsies"] movie, so when they brought it to Broadway, they were able to build her from nothing," says Wells. "I really was inspired so much by the character that [Kara] created, but also that it symbolized how she had to create this character from nothing for Broadway and the character herself was having to create her own career at a time when women weren't taken seriously in the workplace. Women in journalism were not exactly welcomed." 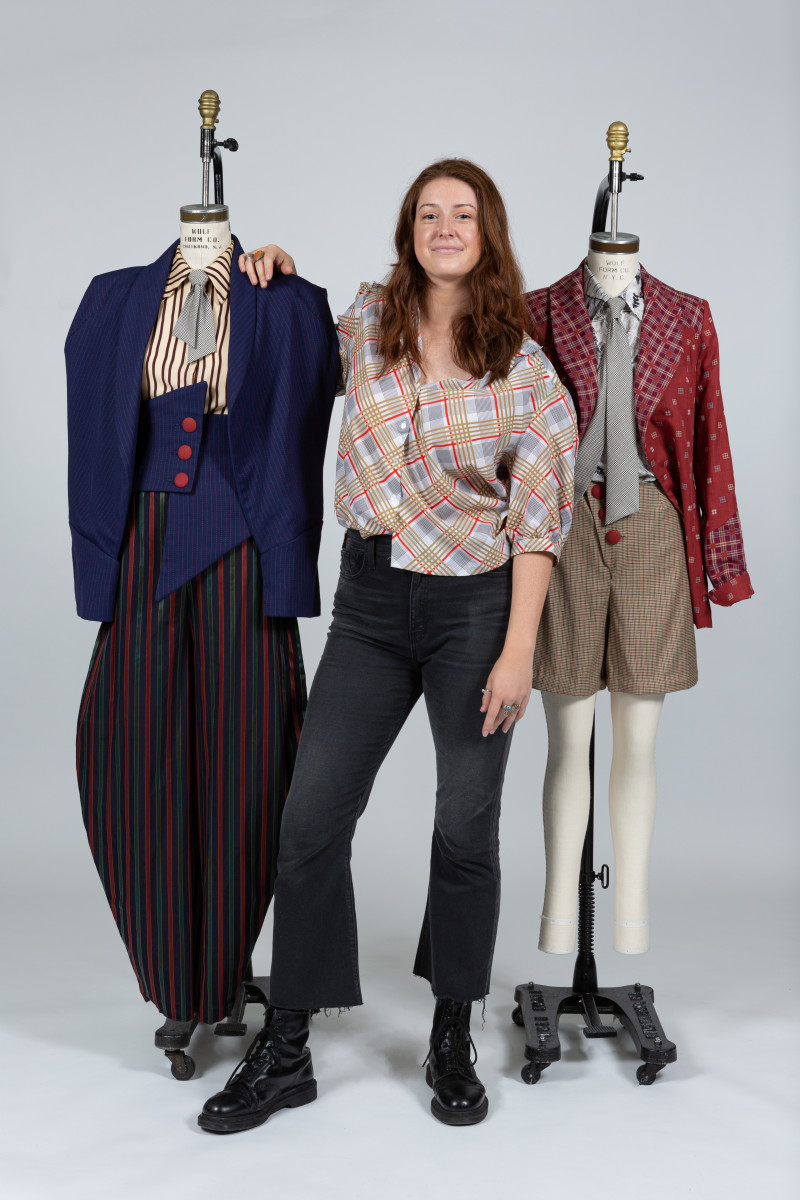 Georgianna Wells, a fashion design student at the Fashion Institute of Technology, with her winning garments designed for Katherine from 'Newsies.' Photo: Courtesy of FIT

For the competition, fourth-year student Paige Walker decided to reimagine everyone's favorite Belle from "Beauty and the Beast" as the beast herself. The concept gave Walker the opportunity to view Belle in two different extremes — the Beauty, a champagne gown that represents the enchanted rose with its petals falling off, and the Beast, a contemporary, athletic-inspired version of Belle. The beast look comes complete with thigh-high patent leather yellow boots, onto which Walker hand painted a python pattern. 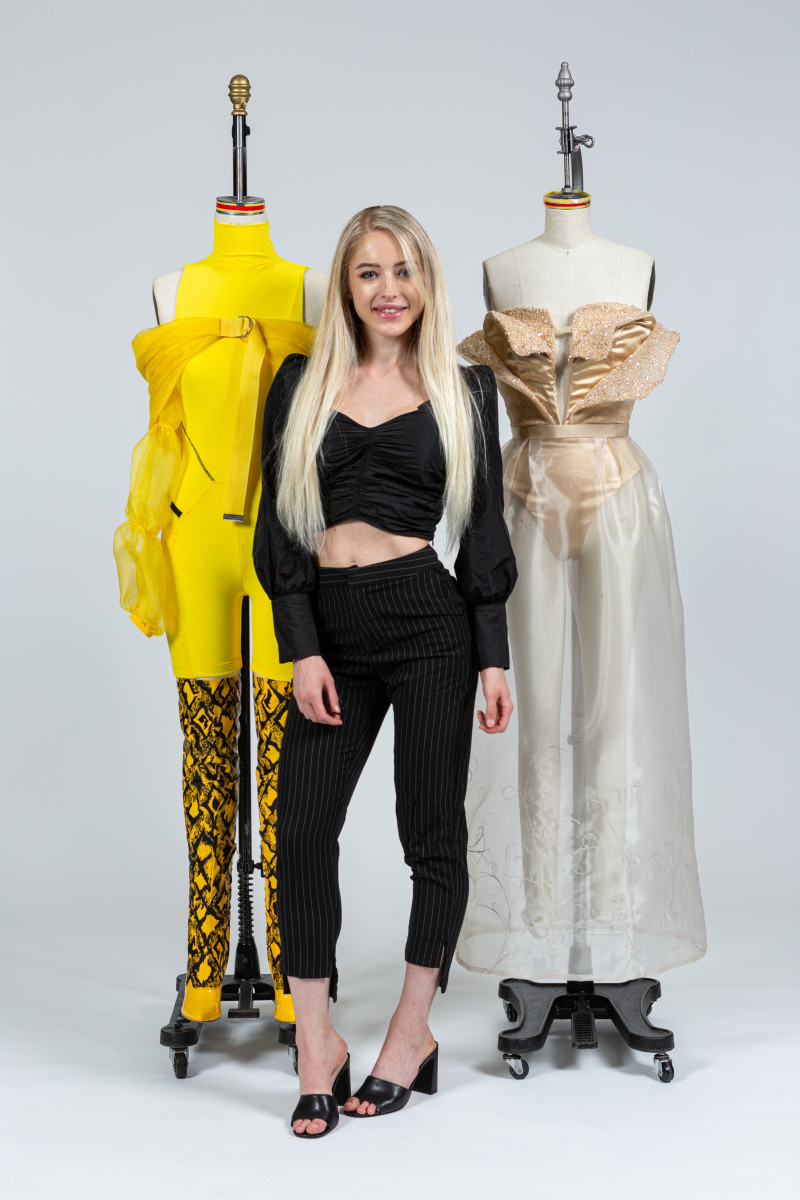 Paige Walker, a fashion design student at the Fashion Institute of Technology, with her winning garments designed for Belle from 'Beauty and the Beast.' Photo: Courtesy of FIT

"Our students, who share the Disney spirit of innovation, embraced the opportunity to participate in this project," says Dr. Joyce F. Brown, president of FIT. "My congratulations to the winners and to Disney Theatrical Productions for 25 years of extraordinary entertainment on Broadway." 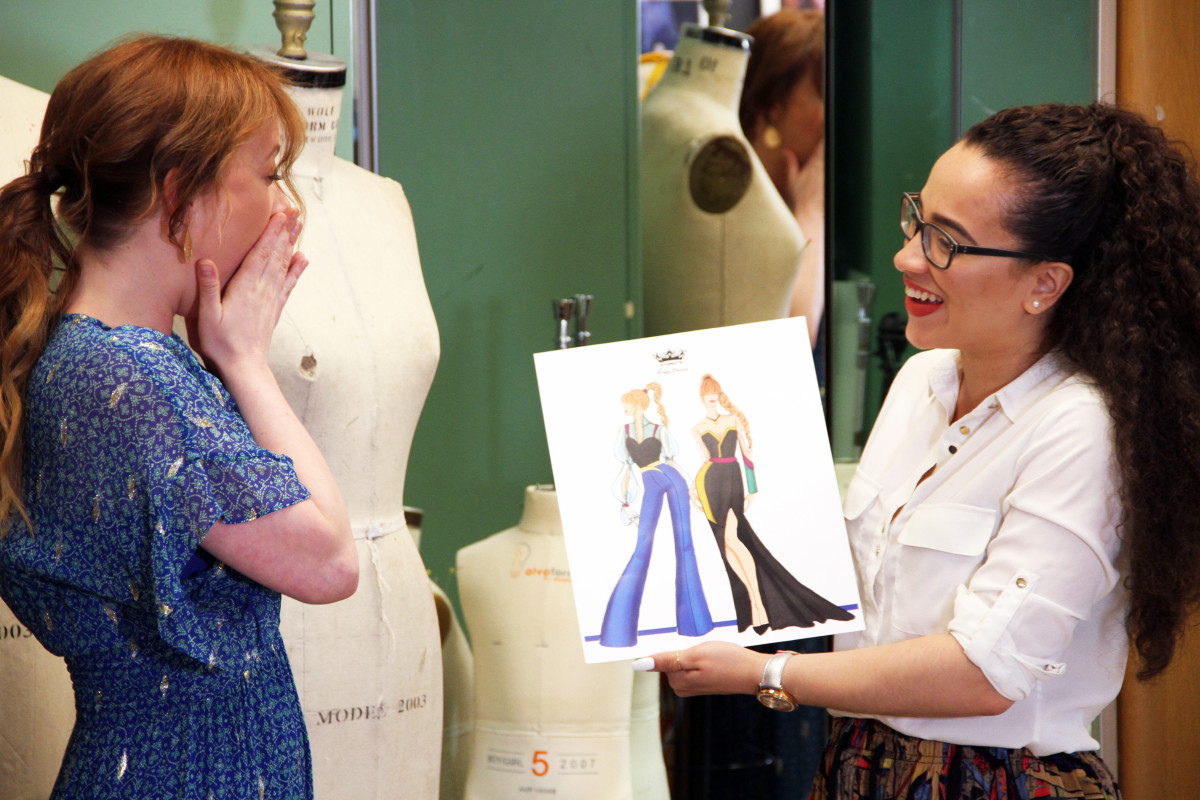 Click through the gallery below to view all 10 students with their modernized Disney garments.